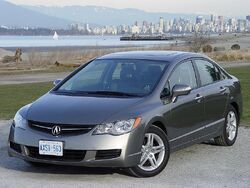 The Acura CSX is an Acura badged version of the Japanese 2006 Honda Civic that replaces the Acura EL. It is only available in Canada. Like the EL, it is built in Alliston, Ontario, Canada. It is designed in Canada and Honda decided to adopt this body style for the Civic that is sold outside of North America.

Note: there is no cd changer with the navigation system

The CSX is not a rebadged JDM Honda Civic, rather Honda Japan chose the Canadian-designed CSX as the template for the JDM Civic.[1][2][3] Externally, the CSX shares its cab forward architecture with the American-market Civic.[4] Differentiating the Acura from its mainstream North American counterpart include a slightly longer nose with shaped headlamp clusters, a full-width lower air intake and a slight crease up the hood's centreline. At the rear, jewelled taillamps and the shaping of the trunk's sheet metal contrast the upscale-marketed CSX from the Civic.

For 2007 models, an auxiliary input jack for the audio system was added for all CSX models.

Like the Honda Civic, the CSX received a mid-model change in 2009, most notably giving it Acura's trademark Power Plenum grille. Other exterior changes include black-housing headlights, octagonal tail-lamps, and revised front bumper and fog lights. While not new to the line-up, the 17-inch alloy wheels once exclusive to the Type S are now standard on all models. New features for 2009 include USB audio connectivity for all models, and Bluetooth handsfree wireless link for Technology and Type-S models. For 2010, the base model has been discontinued and the now-entry level Technology model has been renamed "iTech".

With an all new redesigned CSX expected for 2012, Acura has simplified the CSX line for 2011 offering 2 trim levels, Base and iTech, both have significantly reduced MSRP from the previous 2010 models. The Type-S trim has been discontinued for 2011. Only four colours are available: Crystal Black Pearl, Alabaster Silver Metallic, Polished Metal Metallic, and Taffeta White.